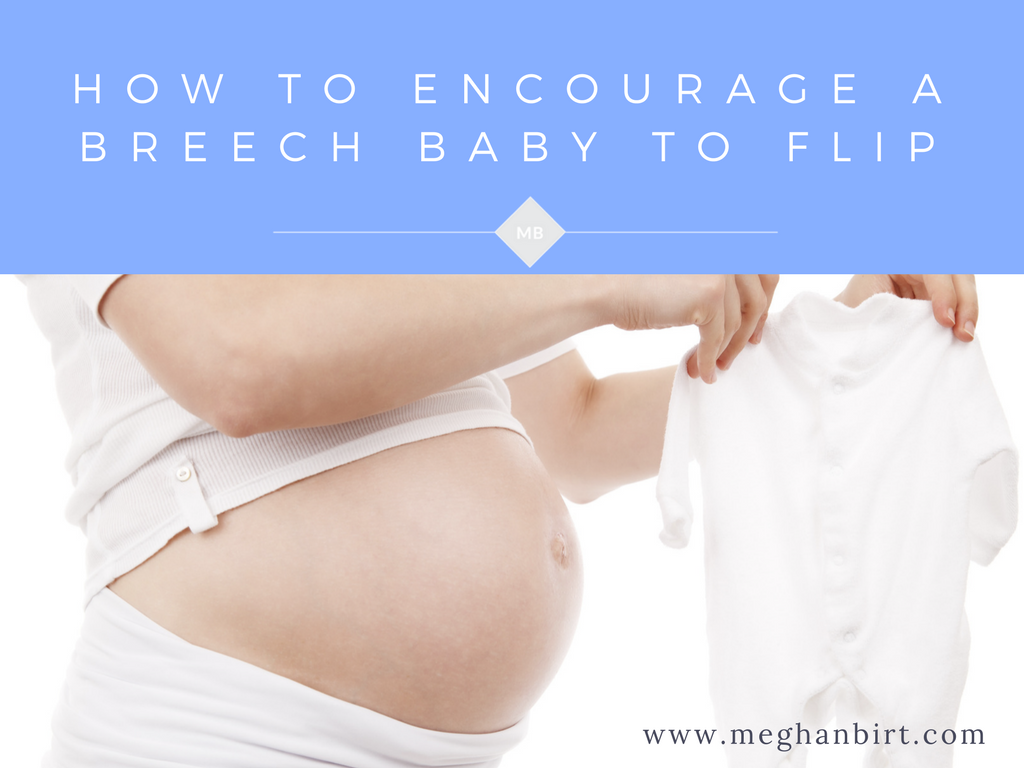 This post is a long time coming. I’m over 1 year postpartum and even longer since trying to get our breech baby to flip. I could blame not having time to write it, but that’s not the case. The real thing is I want to write an encouraging post. I wanted to write a post about doing all of these things to get our breech baby to flip and then be able to say she flipped. The cherry on top of all of the hard work. If you’ve read Ottava’s birth story or or listened to my birth story podcast, you will find out pretty quickly that Ottava didn’t flip. We had an uncompliant breech baby. But instead of looking at her that way, I’m going to say she was exactly where she needed to be and supposed to be to be the healthiest baby. If you have a breech baby, my story is not your story. Your baby could (and probably will) flip. And, for those of you who don’t know, a breech baby is a head up baby (vs a head down, vertex positioned, baby). There are many types of breech positions, but overall breech means head up.

Although our baby stayed breech, I still want this to be a post you read through and feel empowered to encourage your baby to flip. I’m just assuming you’re reading this and pregnant with a breech baby. There’s only two other reasons you’re going to be reading this. One, if you read all of my things (and for that, THANK YOU). And secondly, you had a breech baby, most likely a c-section, and you’re just out there searching more about breech babies.

Let’s get a few things out the way first. I call breech babies breechies. I totally made that up, but when I was pregnant with Ottava and the 9 weeks we knew she was breech, she was affectionately known as my breechie. Next, about 3-4% of babies stay breech. That’s a pretty low percentage. Although we were in that low percentage, I believe that breech babies are there for a reason. They know that it’s the best for them given their environment and circumstance. Remember this, I trust my body and my baby!

And, I have to say this, it isn’t medical advice. Please use these as suggestions and part of my story. Always consult your midwife or OB on this!

Reasons a baby may be breech (or stay breech):

How to Encourage a Breech Baby to Flip

Let’s dive into some things to get a breech baby to flip. Or encourage a breech baby to flip. I want to tell you a bit more about our story. Once again, you may already know it, but I’ll make it shorter. We had no ultrasounds with Ottava and weren’t sure about her presentation. I had a little spotting around 32.5 weeks and we went to Urgent Care to get it checked out.

Although everything was perfect, that is when we learned Ottava was breech. I had been doing some baby positioning exercises throughout my entire pregnancy and thought she was head down. During our brief ultrasound to check for placenta previa, we learned that our baby was breech. At that time it wasn’t a big deal, because lots of babies flipped. I started doing more research, doing more exercises, and hoping this baby would flip.

If you have a breech baby, know this… encouraging a breech baby to flip is a part time job. It’s time, effort, and energy. But it is worth it. Mom’s will do anything for their babies, right?

Here’s what I did over the course of 9 weeks when I was pregnant with Ottava. I would recommend this and do it all over again! I still wouldn’t have added anything to the mix either. I think I did a version of everything.

The best breech resource I’ve found (and could never replicate on my website) is the Flip a Breech page from Spinning Babies. She has a couple more posts on Breech and I read them over and over again during this time. I did those multiple times a day and worked a lot on my hands and knees. What I list below are additions to the Spinning Babies recommendations.

Techniques to Flip a Breech Baby 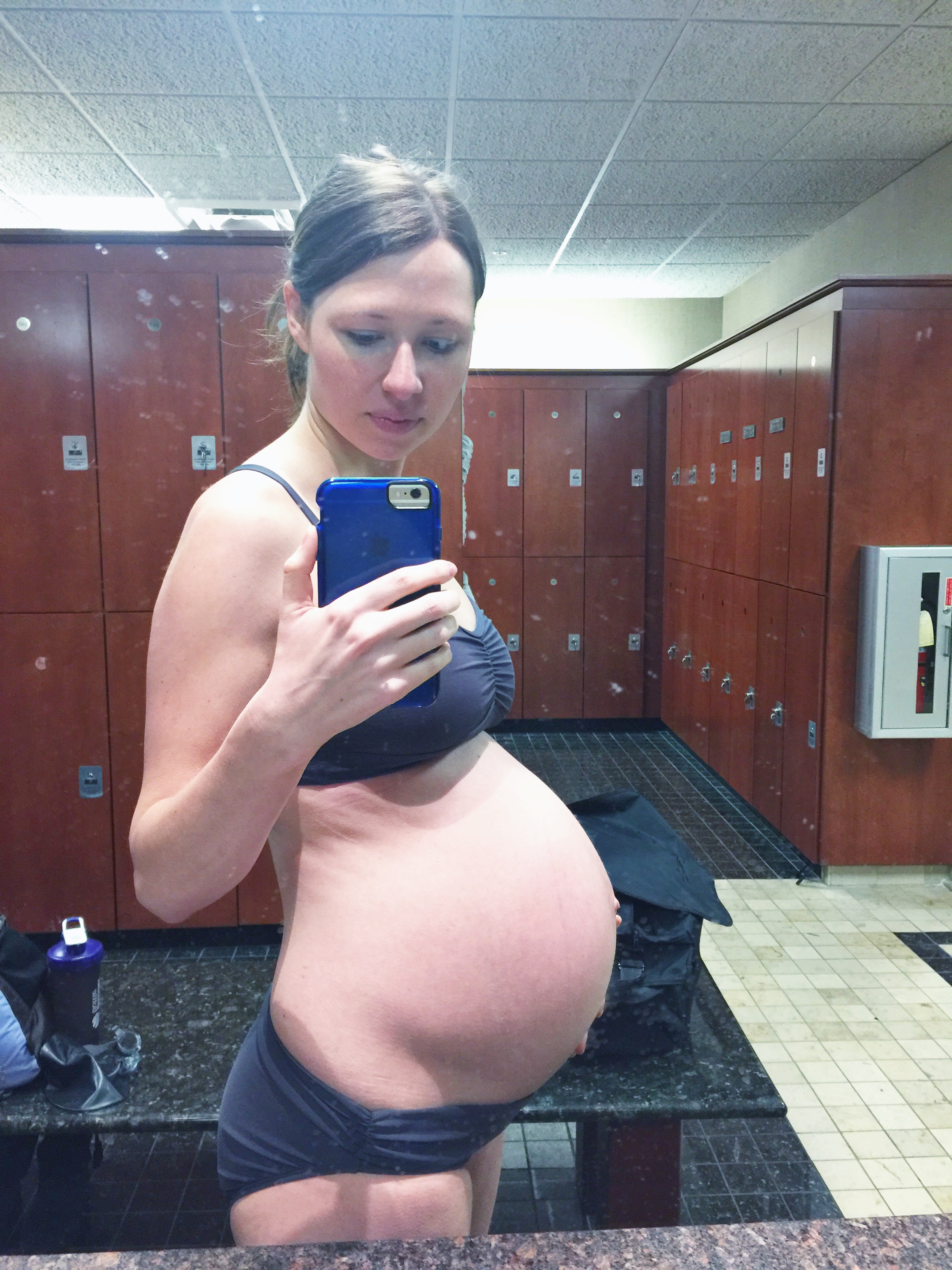 This is me preparing to swim at our local gym. I was “that lady” when it came to a too small suit with a big old pregnant belly. I swam for a week and wasn’t going to buy a new suit.

What is a Breech Baby’s Timeline?

All of the Spinning Babies Breech Exercises should be done at anytime the baby is breech. They are good for optimizing the baby’s positioning. Any additional “professional” help, outside of chiropractic care, doesn’t have to be started until after 32-33 weeks. Because I have a unique uterus shape, I will probably do some massage and balancing techniques earlier on because it’s my goal to get the next baby stuck head down!

Around 36 weeks is when you want to think about an external cephalic version (ECV). I will say, not all doctors are well qualified to do one well. I hear of many horror stories of them, and although they can be done poorly, they shouldn’t be traumatic. They are a gently forceful (is that a word combo) to encourage the baby to flip. Find a highly recommended ECV doctor in the area. We went to a different doctor, different system, and totally new hospital 45 minutes away to see one the best in the state to perform our ECV. It wasn’t horrible for me and Ottava did great. I was super nervous for it, but it was much easier than I thought. The only discomfort I had was when he was going around my hip flexor (psoas) muscle, but he pre-warned me about that. He tried three times (in both directions) and after the third try said the baby doesn’t want to move and I’m not going to try make her. If you wait beyond 36 weeks for an ECV, it is more likely the baby has engaged in your pelvis and not allow to be turned. 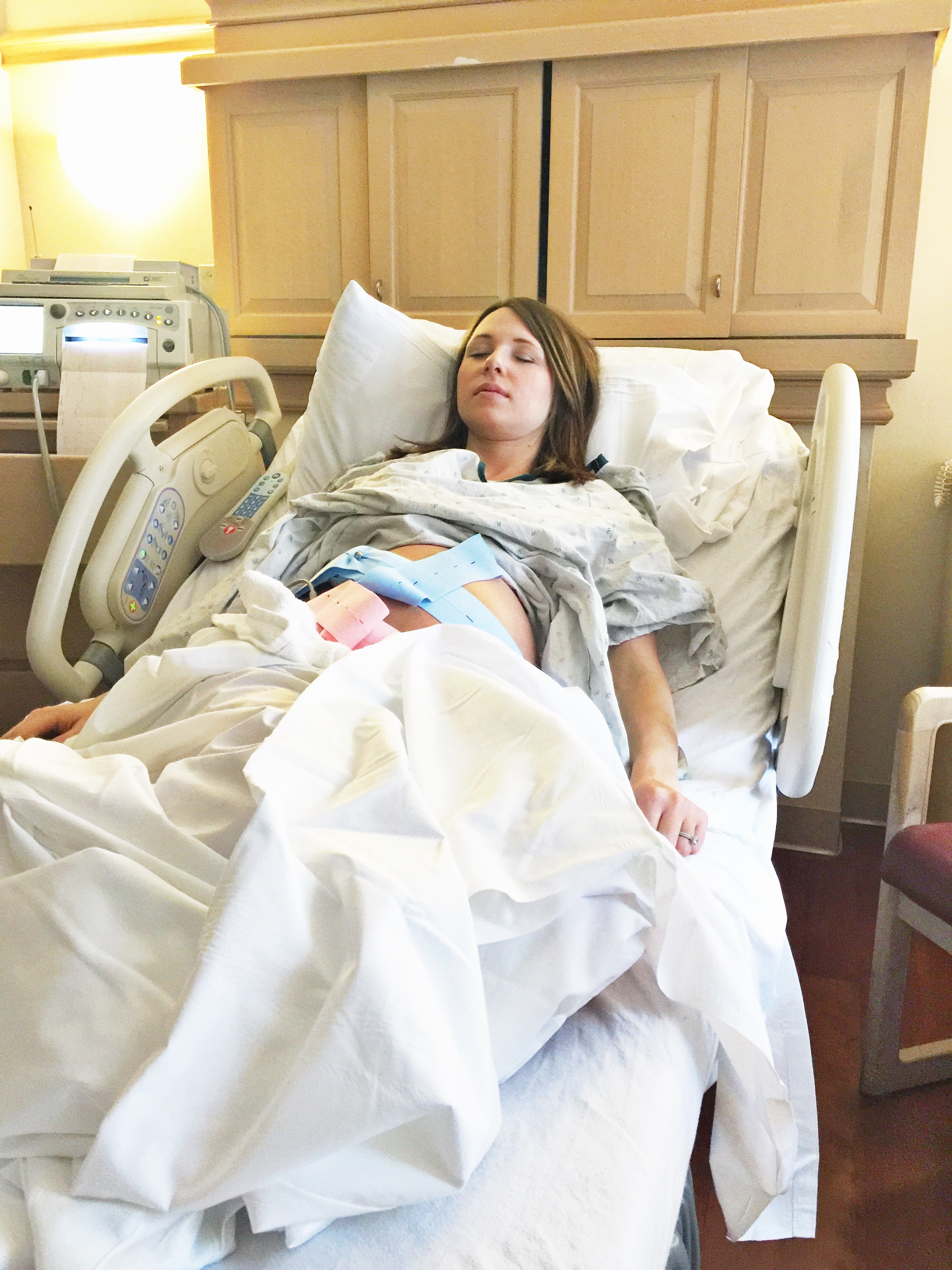 Me prepping for my ECV. I wasn’t in pain, just nervous and preparing. And Ottava was being continuously monitored.

I wanted to go into labor, which you can read more about in our birth story. It was important to me that I waited until she decided she wanted to be born. I also wanted any time she could flip to be available to her. I also held out hope that some uterine contractions during labor could encourage her to flip. She didn’t, but I’m so glad I waited until labor to do our cesarean.

I think this is the time I want to talk about a vaginal breech birth. We were planning on a home birth and was under no care with an OB. When we had our “breech talk” with our midwives at 35 weeks, we needed to see what kind of birth we wanted to have. Yes, we had the opportunity to do a vagnial home birth. A lot of people think I had no choice in the matter, and I want to clarify that. A lot of women have no choice and a breech baby is taken at 39 weeks via cesarean, no questions asked. I think giving all of the birth choices and options to a mom is the best option! In our state, vaginal breech births are no longer legal to be done in a birth center or in a hospital. Even with a trained OB or midwife.

I had two choices, cesarean or breech homebirth. If you would have asked me pre-pregnancy or at the beginning of pregnancy what I would do if I had a breech baby, I would have said homebirth with absolute certainty. When you’re in that situation, realize the emotions and fears for your baby are different. If you know a breech momma, give them a lot of love. These decisions aren’t easy. My ideal situation would have been for a trained OB in a hospital setting with the option for a c-section minutes away. Guess what? I couldn’t do that. And after a lot of prayer, we decided our best option and the one we had the most peace about was a cesarean. I told my husband, if I had another breech baby I don’t know what I’d do. I would maybe choose homebirth. Each pregnancy and each baby is so different! 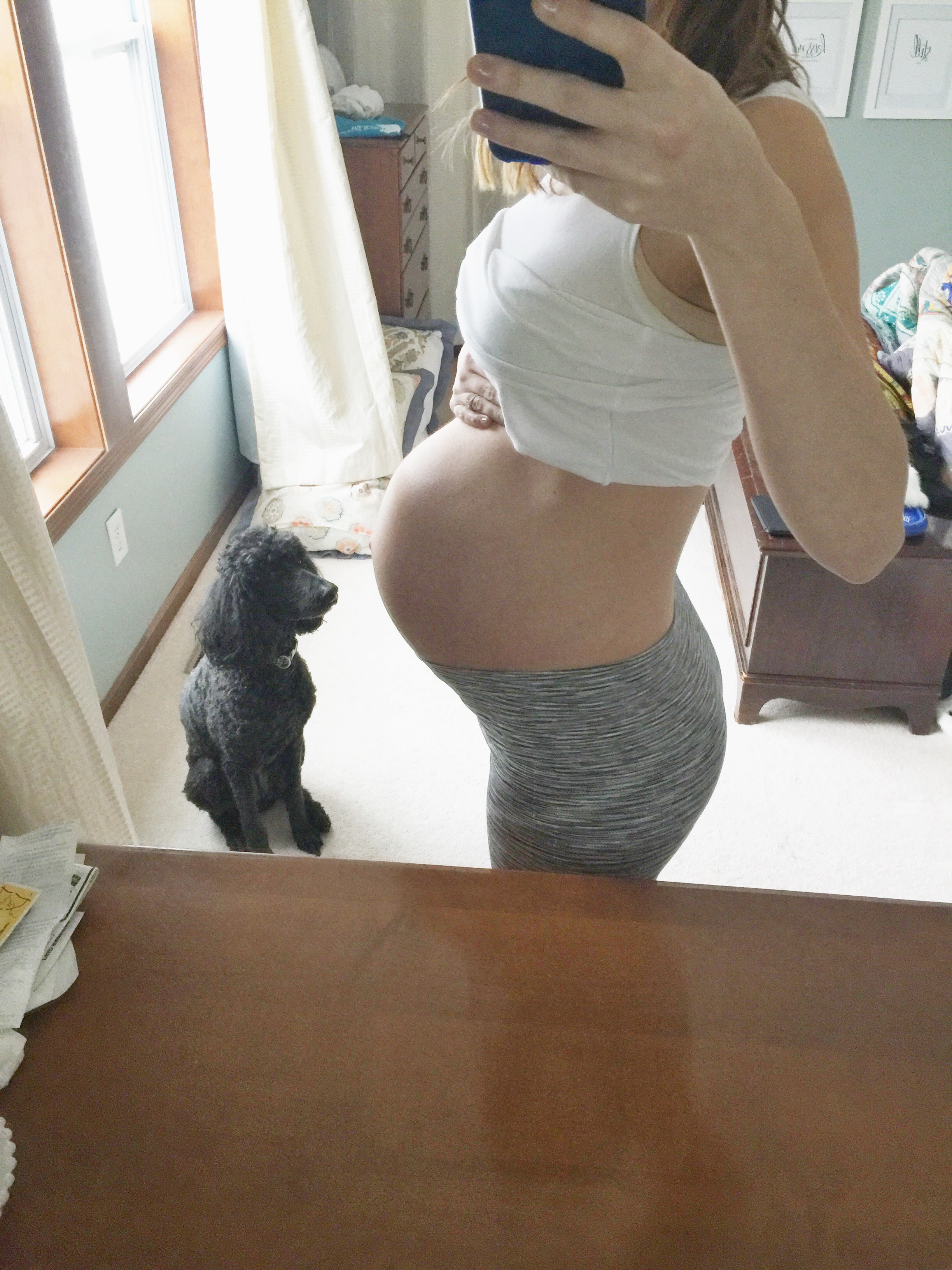 What if Your Baby Doesn’t Flip?

This is the part of my story that I can share with you with utmost honesty. Some babies don’t flip. Most do, but some don’t. Here’s my best advice, trust your body and trust your baby. Realize you can still have a beautiful birth and healthy baby when your baby is breech. It’s not the end of the world, although LOTS of emotions come with having a breechie. And that is ok. Feel the feelings, process the emotions, do all of the exercises. They are worth it. Give it all you have to get that baby to flip. It’s one way you can “mother” before your baby is born. I’d say this, don’t tie any emotions to your baby flipping or not based on your efforts. I remember I started getting mad at the baby because she was supposed to flip. I was doing everything and she was supposed to comply. Once I realized she was doing what she needed, I could distance myself from the emotions that were based on her performance. I could love her breech or not, and take each day as they come. It’s hard, I get it. But it’s worth it.

And please, reach out to me if you have a little breechie of your own. I’d love to hear from you! 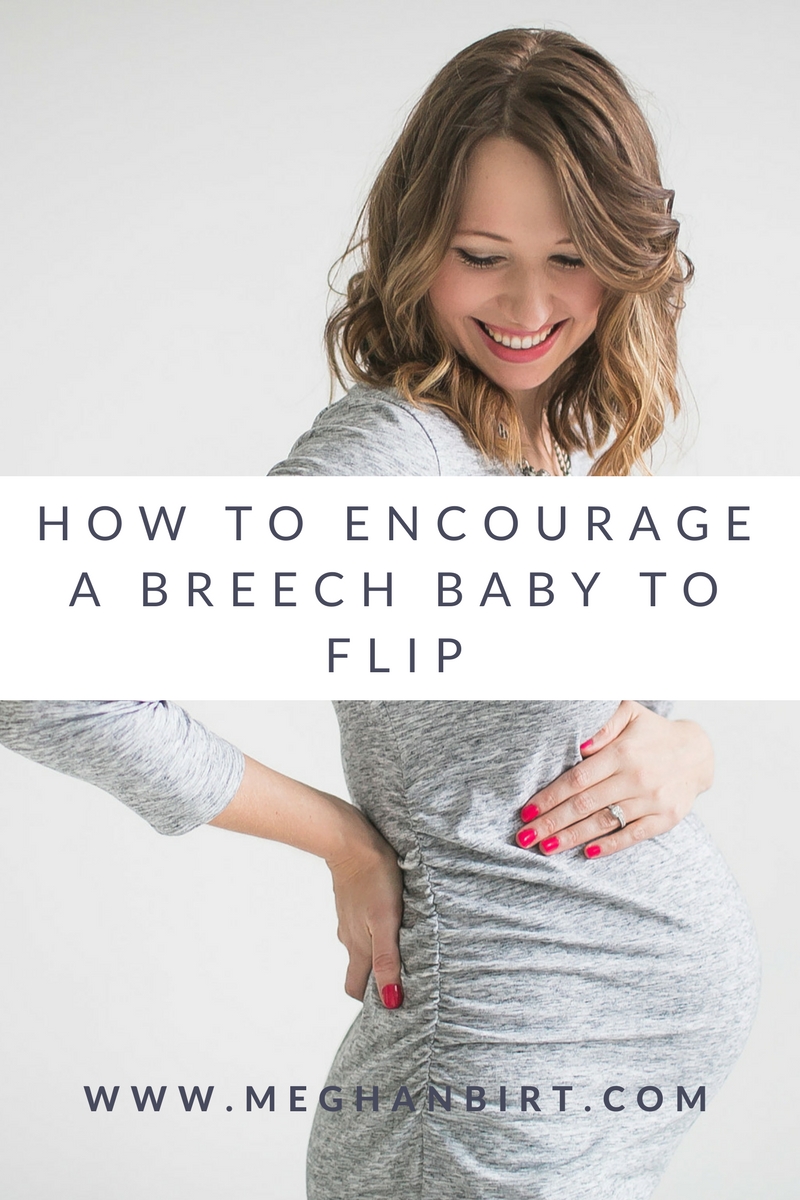 What is a Gentle or Family Centered Cesarean?

Things I wished I would have Known before my Cesarean

Don't miss out on anything! Join my healthy living newsletter for encouragement right to your inbox to kickstart your health in a simplified way!

Success! Now check your email to confirm your subscription.

Join our newsletter to get all the latest!

This site uses Akismet to reduce spam. Learn how your comment data is processed. 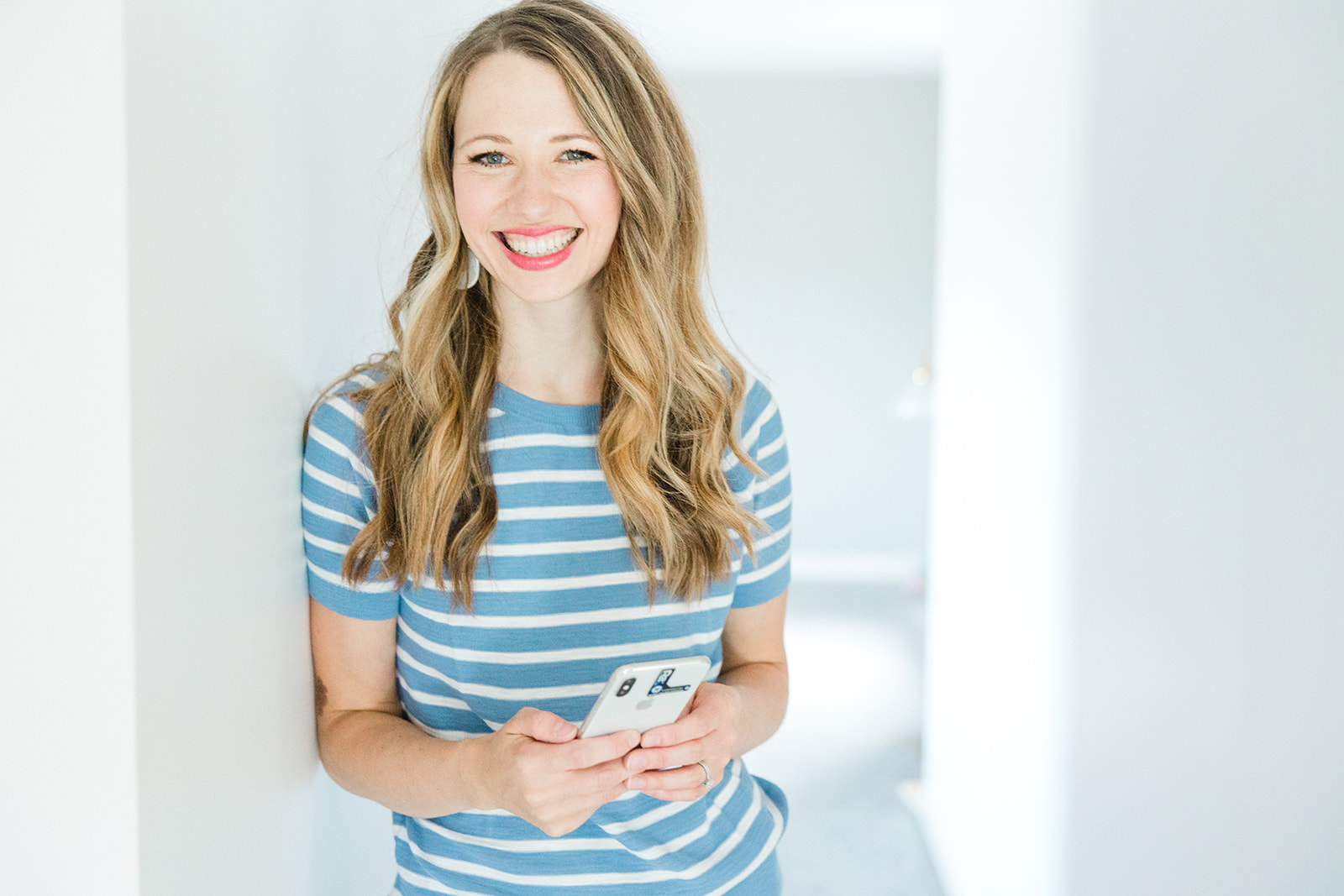 Hi, I’m Dr. Meghan. I love Jesus. I'm a wife to Phil, mom to Ottava and Evelyn, chiropractor, and healthy living encourager. Oh, and I adore a cup of weak coffee with (lots of) heavy cream. I’m passionate about inspiring women to fall in love with natural health. I break down the complex world of healthy living into simple steps you can take wherever you're at with your wellness journey.

Stay up to date 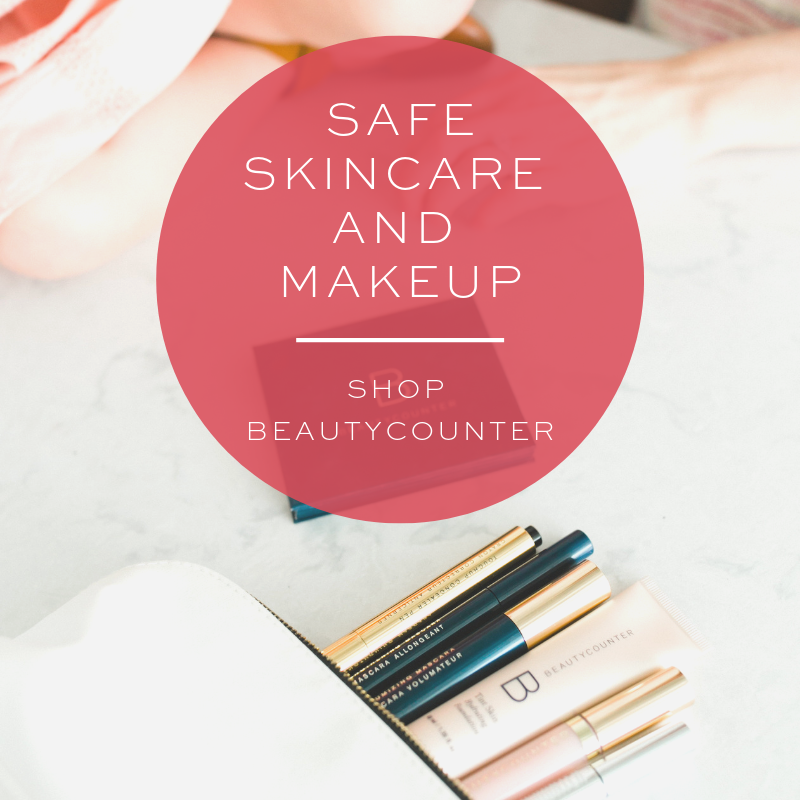 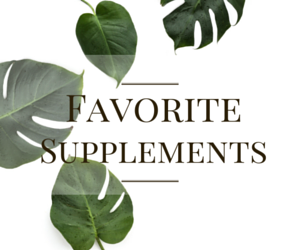 Your body was created and designed to heal itself

This error message is only visible to WordPress admins